Our research aims to understand the impact of global changes (anthropogenic and climatic) on insect diversity, abundance and ecology in the context of food security and public health. We are working on insect models with positive impacts on human well-being, such as pollinating insects, edible insects and natural enemies of insect pests, as well as negative impacts such as crop pests and vectors of mammalian parasites. The objectives are to identify the mechanisms underlying the responses of these insects to biotic and abiotic pressures, and to predict the impacts and feedbacks of global change from a management and conservation perspective. The main study sites are located in continental Europe, sub-Saharan Africa and Latin America.

Our locations and partnerships: 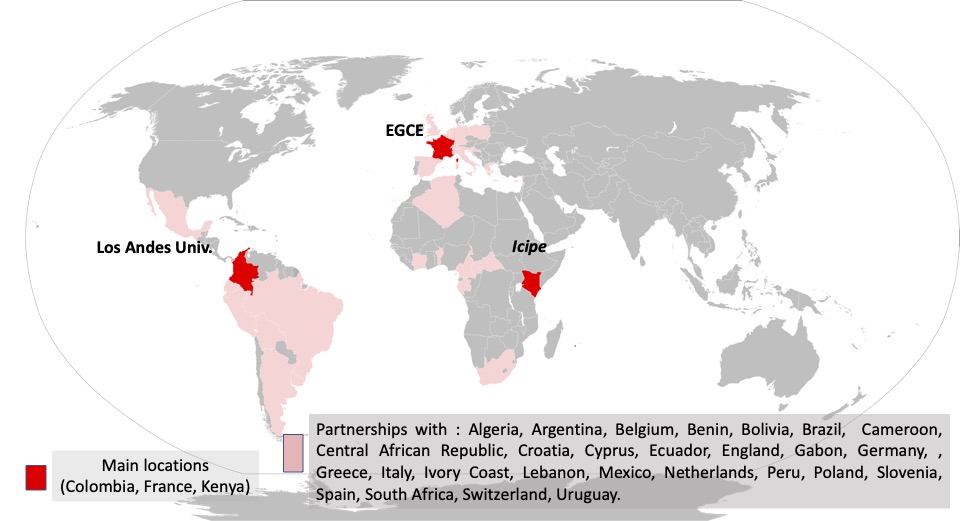 Four main research areas are developed within our pole:

PhD manuscripts of the students trained since 2004:

2004- Kergoat Gaël J. – The Bruchidius genera (Coleoptera, Bruchidae): a model to study the evolutionary relationships between insects and plants.

2006- Sezonlin Michel – Phylogeography and population genetic of the cereal stem borer Busseola fusca (Lepiudoptera: Noctuidae), in sub-Saharan Africa, impact for the biological control of this insect.

2008- Chabaud Marie-Ange – Developement of appetitive conditionings and analysis of individual and group memory performances in appetitive and aversive contexts in Drosophila.

2011- Quartier Marion – Study of the impact of anthropization on the evolutionary ecology of the vectors of Chagas disease, case of three communities of Tapajós in the Brazilian Amazon.

2013- Bertrand Bénédicte – Analysis of the genetic diversity of bee populations of the West-Mediterranean lineage of bees (Apis mellifera mellifera): Application to conservation.

2013- Glaser Nicolas – Contribution of the chemical senses to new environment : a transcriptomic study in the stemborer Sesamia nonagrioides (Lepidoptera : Noctuidae).

2013- Chardonnet Floriane – Role of the foraging gene in the evolution of the feeding behaviour of the noctuid cereal stemborers.

2016- Marchant Axelle – The process of domiciliation of hematophagus bugs vectors of Chagas disease: contribution of the chemosensory transcriptome study.

2019- Benoist Romain – Behavioural, physiological and genetic basis of the reproductive success of a hymenopteran parasitoid.

2020- Bichang’a Gladys – Biochemical and molecular aspects of host recognition and acceptance by Cotesia spp. populations in coastal and western Kenya.

2020- Bonoukpoè Sokame – Functioning of a community of lepidopteran maize stemborers and associated parasitoids following the fall armyworm invasion in Kenya.