The core of my research topics is transposable elements (TEs, aka transposons), from an evolutionary perspective. They are basically selfish DNA present in every genome, with no obvious function for the cell. So, why are they here?, how did they get in?, why are they so numerous and diversified?, why can’t we get rid of them?, how do they evolve?, how do they interact with other genome components and with each other? What is the genome answer to these invaders?, what is the consequence of their presence in the genome?

We may have some answers to all these questions. But answers are always imprecise and always generate more questions…

For grabbing more informations on those genetic entities, I develop bioinformatics tools for analyzing TEs in sequenced genomes (mainly from eukaryots), I explore some theoretical frameworks using in silico simulations, and I run experimental evolution, using one of the best models for the biologist: the fruit fly Drosophila, and one of the best models for the “transposonist”: the mariner element (the historical one identified in 1985, a representative of Class II element)

By extension I am also interested with any other selfish DNA, and any interaction between genetic entities.

Dynamics and evolution of transposable elements

Transposable elements (TEs) usually amplify in genomes and populations from one initial copy, landed through horizontal transfer. It starts then to amplify, invading the genome, and the population, until selection or regulation counteract and stabilize the copy number. Transposable element copies accumulate mutations with time, and ultimately become inactive. Hence, a TE in a species is never forever active, but always leave tracks of its passage.

Within the genome, a lineage amplified from one copy is then monophyletic, and relationships between copies can be described by a phylogenetic analysis. if we suppose that copies accumulate mutations with time. Then the topology of the trees, and more particularly the deepness of the nodes can be used to estimate the past transposition rate, and its variation across time. The resulting graphs easily illustrate the evolutionary dynamic of a transposon family (Le Rouzic et al. 2013)

An update of the classification (Wicker et al 2007)

Transposable elements are typically divided into two main Classes. Class I corresponds to  TEs that use an RNA intermediate for copy-and-paste transposition, whereas Class II transpose directly by excision and reinsertion (cut-and-paste mechanisms). Several subclasses and sub-families are then distinguished, according to their structural  characteristics (presence of LTR, genes order…) and phylogenetic relationships (protein motifs)

The discovery of new atypic families of transposable elements has made necessary an update of the classification system. The classification proposed in 2007 by Wicker and coworkers is based on the classical one. A new criterion is used: the number of strand cut at the donor site during transposition defines two subclasses among the Class II. An intermediate hierarchical level is proposed : the Order, that relies on structural characteristics of elements 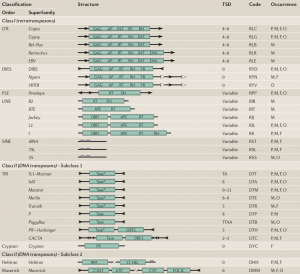 Transposases structure in the Mutator superfamily (Hua-Van and Capy, 2008)

Autonomous transposable elements encode one or several proteins that are required for transposition, for exemple an integrase, for Class I elements or a transposase  for Class II elements. Both are involved in the reinsertion process and have endonucleases and strand transfer activities. In most families, those proteins belong to the Ribonuclease H-like large protein superfamily and are characterized by a catalytic motif DDE.
Mutator is a superfamily, comprising bacterial and eukaryotic elements. Bacterial Mutator families (IS256-like) contain a DDE atalytic domain, that differ for the classic DDE present in retroelement integrases. Notably, the two last residue are separated by more than 100 AA. In eukaryotic Mutator this motif is less conserved, and barely detectable.  The comparison of the primary sequence of a large number of transposase, combined with secondary and tertiary structures analysis have allowed characterizing this catalytic motif. This illustrates the fact that for highly divergent protein, multi- level analyses are necessary .

Autonomous elements versus non-autonomous ones

MITEs are non autonomous  elements that uses the transposases encoded by related autonomous copies for multiply. This parasitic strategy is succesful and often lead to highly repeated MITE families. However newly formed MITEs that are not yet amplified are difficult to detect, because of their small size and the absence of coding regions. De novo detection of MITE in genomes relies mainly on their structural characteristic, i.e, the presence of terminal inverted repeats (TIRs) and the fact that they can transpose (at least two independent copies). Detection tools can only be efficient if they contain some methods to filter out the numerous false positive candidates.

The Class II mariner family comprises numerous elements found in metazoa. All share a very homogeneous structure: About 1.3 kb long, they are characterized by two TIRs (Terminal Inverted  Repeats) and one intronless ORF.  Like all elements from the Tc1-mariner superfamily, they insert specifically into TA dinucleotide, and the transposase has a typical DDE catalytic motif (rve type).
mariner-like elements (MLEs) populate numerous metazoa genomes, and in particular Drosophila. The first mariner element was discovered in 1986 in Drosophila mauritiana, a sister species of Drosophila melanogaster. The active TE lineage is referred  as mariner, but also bear alternative names (mos1, from the active copy), DROMAR1, Dmmar1 (in some database).

The phenotypic excision assay
Somatic excision of mariner (type Mos1) can be visualised in Drosophila (D. melanogaster, D. mauritiana et D. simulans) using a phenotypic excision assay of the peach copy. This mariner copy is inserted in 5′ of the white gene, conferring flies a peach-colored-eyed phenotype [wpch or peach]. peach excision in eye cells restore white activity, leading to red spots or dots on a peach background. Such flies are said “mosaic”. This assay allows evaluating the influence various environmental or genomic factors on the (somatic) transposition level. 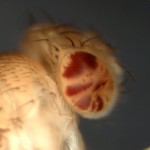 Photo: Fly with mosaic eyes, resulting from the excision of mariner from the white gene
This assay also offers  a simple phenotypic way for following genome and population invasion by mariner. We follow experimental populations in which one mos1-carrying fly is introduced as a migrant, among 99 flies that only contain the inactive copy.  At each generation, the extent of invasion can be followed by counting the proportion of mosaic flies. The copy number amplification is monitored by qPCR.