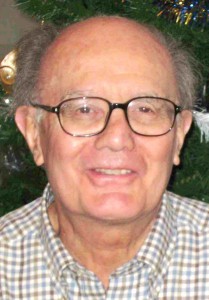 member  of the executive board (the French Entomological Society)

EXPERIMENTAL INVESTIGATIONS
The model system consisting of Drosophila and parasitic wasps was chosen because it was well suited for studies on development of resistance in hosts and development of virulence (protection) of parasitoids at the molecular, genetical and populational levels.

against a parasitoid egg 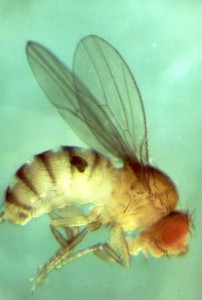 Drosopila adult with the mark of its immune capacity 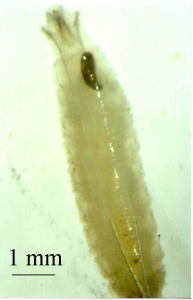 The genetic mechanism of resistance of D. melanogaster is based on a monogenic dominant system. This resistant character is inherited autosomally, suggesting a single major segregating locus with two alleles (resistance and susceptibility). This system is highly specific and 2 genes of resistance are now localized (Rlb and Rat against L. boulardi and Asobara tabida, respectively) on the right arm of the second chromosome. We also demonstrated with the parasitic wasp Leptopilina boulardi that all the genetic components of virulence variation are comprised in a single segregating factor integrated to the wasp chromosome (as a “gene”). Two genetic systems of virulence have been detected (Ism and ISy), each against a host species, D. melanogaster and D. yakuba respectively. Encapsulation of wasp egg by its host appears to be governed by major genes in the host and in the parasitoid populations. The gene for resistance against L. boulardi in the host is counteracted by a gene for virulence against D. melanogaster immune system in the parasitoid population. Species specificity of these genes have been shown both for the host and the parasitoid, according to a “gene-for-species” model. From an evolutionnary point of view, local adaptations of the immune suppressive genes toward the host species present in the locality were detected.

These investigations of the biochemical and genetic aspects of the Drosophila-parasitoid relationships were successfully developed in part from fruitful cooperations with Professor A. Nappi (Loyola University, Chicago) and Professor Marylene Poirié (Nice University, INRA, Sophia Antipolis). Since 2008 our collaborative efforts have produced 5 published reviews in various journals concerning co-evolutionary processes, specially “The Advances in Parasitology“. 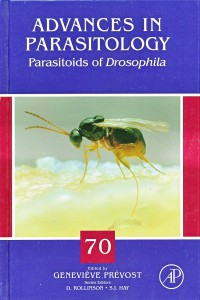 I have been firstly interested in the historical development of entomology and entomologists, especially of Reaumur (1683-1757) and Buffon (1707-1788).

1. THE PHYLLOXERA ATTACK FRENCH HISTORY :
I also investigated various aspects of the scientific cooperation between French and American entomologists during the period 1830-1940. Perhaps one of the most successful cooperations between these two groups was between Professor Jules Planchon (1823-1888) and Professor Charles Valentine Riley (1843-1895), the famous American entomologist who saved French vineyards from attack by the louse Phylloxera by introducing American resistant Vitis species in France. It has been certainly a model scientific cooperation between the two countries. 5 papers have been published concerning this aspect of french-american cooperation. 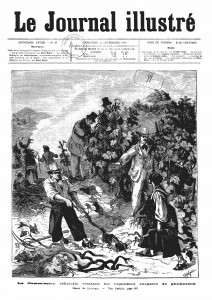 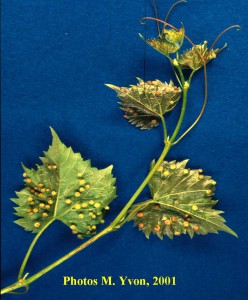 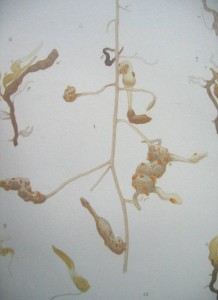 I gave the opening lecture at the next conference “6th International Symposium on Phylloxera“, held at Bordeaux, on august 28-30, 2013, untitled “An exemplary partnership of American entomologist (C. V. Riley) with French entomologists in control of the Grape Phylloxera in France (1868–1895)”

2. DARWINISM IN FRANCE :
On year 2006, I discovered in the Riley’s archives (National Agricultural Library, Beltsville, MD, USA) the dedicated photograph of his French colleague friend, H. de Varigny (1855-1934) who had chosen to introduce the Darwinian theory to the French people. I recounted this relationship in my book published in 2009 dealing with the scientific life of H. de Varigny and his efforts to introduce these new evolutionary concepts in France despite the hostility of French biologists to Darwinian principals, an hostility that delayed by 8 years the election of Darwin to the French Academy of Sciences !
Preface written by Claude Combes, Professor emeritus at Perpignan university, member of the French Academy of sciences 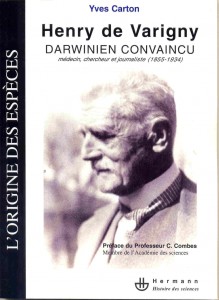 BIBLIOTHEQUE NATIONALE DE FRANCE, “Les rendez-vous du samedi”, site François-Mitterrand, free access. The french national library organize each week (on saturday afternoon, 17h-18h pm) an appointment with some well-known persons such as authors, movie producers, scientists, artists, whom production has retained attention.
Saturday, 23 may 2009, 17h – 18h : Yves Carton “accueil et diffusion du darwinisme en France” Yves Carton is the guest of this new appointment for his book : ” Henry de Varigny, darwinien convaincu, médecin, chercheur et journaliste (1855-1934) ” published by Hermann editor. Hervé Colinmaire, director of the department “Sciences et techniques de la BnF”, with the collaboration of Jérôme Petit, responsible of the science history collections, will animate this meeting. Darwinian theory concerning species evolution has been more or less well understood in France, with a hostile reception by the french biologists. Henry de Varigny, physician and PhD, researcher, will choose scientific journalism to better explain darwinism to the french poeple. This meeting will be follow by a dedication of his book in the library.

3. ENTOMOLOGY and DARWINISM
More recently, I have investigated a lot of english and french archives to better understand the relationships between Charles Darwin, darwinism and entomology, and specially the French entomologists. It is related in a book published on 2011 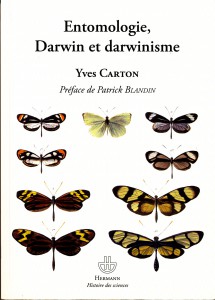 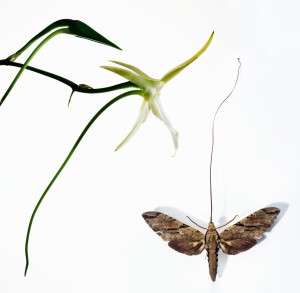 Charles Darwin (1809-1882) is partially unknown for his scientific investigations as an entomologist. Entomology has had a great importance for Darwin fostering the development his theory of Natural Selection. In this book, Yves Carton investigates the influence of entomology on the different aspects of Darwin’s work.
With Darwin’s original observations, notably on bees and butterflies, the first part of the book details Darwin’s attraction for entomology, first during period spent at Cambridge University, and during the voyage of the Beagle around the world, and then in 1842, at Down House.
In the second part of the book, the author examines the importance and role of entomology in four of Darwin’s books. Publishing The Origin of the Species in 1859 induced a complete change in his relationships with English entomologists, his friends. The book was considered by many individuals as highly controversial. However, some friendly entomologists who understood veracity of Darwin’s arguments were very instrumental in fostering the spread of this new theory on species evolution.
In the third and last section of the book, the author analyzes the connections of French entomologists with Darwin and Darwinism. Generally, hostility among entomologists against the new Darwinian concepts was very common, with neo-Lamarckism representing until recently a strong influence in France. However, various institutions, such as the National History Museum, the French Entomological Society, and universities in which entomology plays an important role, all functioned, sometimes in a negative way, in advancing Darwin’s theory.
No book, even in english, has previously examined these different aspects of entomology and Darwinism.
Preface written by Patrick Blandin, Professor emeritus of the national Museum of natural History, senior Director of the “Grande Galerie de l’Evolution”, vice-President of the french entomological Society
A partial translation has been published recently in American Entomologist, 2012, 58, 4, pp. 208-212. click here

4. The cooperation between French and American Entomologists from 18230 to 1940.

This is the story (in french !)of the relationships forged between French and American entomologists on more than a century (1830-1940)which is reported. French biology has benefited from these early contacts and exchanges without any competitive spirit at the time, but instead with pleasure to bring to his colleague assistance and knowledge. We then see build this ideal of internationalization of science.

From 1830 to 1860, the French and American entomologists want to see the other side of the Atlantic. For the former, it is above all the desire to discover a new territory. For the latter, come to France is to discover the French scientific community and somehow be dubbed by it.

From 1860 to 1900, one grasps how the American presence has to fight against this disaster in the making for French viticulture, with the discovery of phylloxera, the aphid sucker roots. Some entomologists, French but also American, were able to have a visionary approach, proposing the graft of the french vines on american vine roots recognized as resistant, and that, paradoxically, had brought evil.

From 1900 to 1920, the popularity of the biological control against crop pests came from another continent. These exchanges between entomologists have allowed them to find the most effective biological agent for acclimatization on the continent where there is the introduced pest.

From 1920 to 1940, period in which some biology visionaries,  perceived the revolution that is taking place in biological sciences in America, especially in genetics, thanks to this exceptional material that is Drosophila. One also observes the fracture that gradually develops between the two communities, that of France still believing in their successes of the 19th century.